Visitors on the infopage since 2007:

Hi and Welcome to the homepage of the Tug of War Club Neuried.

First of all, a brief introduction of our little town Neuried, which is rather to be considered a pretty nice village, located in southern Germany, right within the heart of the beautiful upper Rhine Valley between Basel/Switzerland in the south and Karlsruhe in the north. 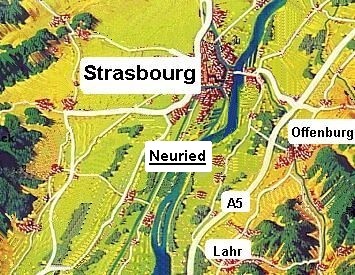 Moreover, Neuried is enclosed by the Vogeses to the west and the Black Forrest to the east. The town is very close to the French border just 10 km south of Strasbourg/France, the home of the European Parliament. Neuried by the way is the name of the community founded in 1975. Back then it was formed of five different little towns namely Altenheim, Ichenheim, Dundenheim, Schutterzell and Muellen. The home base and the training of our Tug of War Club is in Altenheim.

Here, Tug of war has a long tradition. The Team was part of the town's Athletic Sports Club, a wrestling club in its mean function. The first competition has taken place in 1926. During the sixties, the heavy weight team was considerably successful. In the years of 1962 to 1966 they won the German Championship and they succeeded another time in 1974. After having broken up with the old club a new team and a new club has been founded in december 1975. Without a doubt, the German Tug of War scene was asleep for quite some time. As a result, several journeys to Switzerland were organized almost every Sunday for more than five years in order to be able to take part in any competitions at all. These can be considered the difficult and also exhausting years of the Clubs' history. 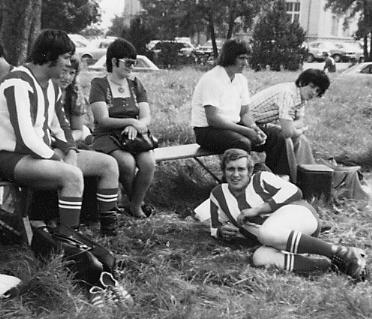 Without a doubt, the first highlight in our younger Tug of War history was the trip to the world championship in Kappstadt/South Africa in November of 1976. Our team (Neuried) made a sensational 3rd Place in the Club-Open. By the way, this was the the first medal in an international competition for Germany since the Olympic Games in 1906. After the reorganization of the German and international Tug of War scene, Neuried turned into one of the most successful and recognized team in southern Germany for being a member of the Southern Badenia Landesliga (640kg) as well as of the the Premier league (640kg) for several years. However, on the peak of the success, the team slid down into middle-class. Nevertheless, during the last couple of seasons we improved constantly, a development which climaxed in the winning of the Landesliga Championship in 1997,1998, 2000 and 2001. Finally, the Tug of War Team Neuried has rejoined the German Premier League in 2002 and made a surprising 5th place during its first season. Due to personal problems we finished our second Premier League season with a 7th place in 2003 and fortunately managed to keep the league for 2004 in a relegation tournament. And again we had a very thrilling saison in 2004. We got rid off the unloved 7th place in the final tournament and did not need to go through the relegation for 2005. But the saison 2005 did not turn out very lucky for us. We end up on the last place and have to go back to the second league in 2006. Here we keep up since with one of the places in front.

Aside from the Premier and Second League business our team has organized several events such as the first European Champions Cup, and the German Championship in the heavy weight class. Additionally, we visited many international competitions i.e. in Stans (WM 1985), Slagharen (WM 1986), Malmö (WM 1988) and in Pretoria (WM2002). Who knows, maybe we have already met on the rope (check it out: the other side of the rope...). Our team has the most intense international experience with several Canadian Army teams. As long as they were stationed in Lahr as part of the allied forces in Germany, they regularly took part in the Landesliga competitions in order to be prepared for the Commonwealth Army Games. During their first season the 4th Service Battalion team visited our training Hours on a regular basis. Later, the members of the French Canadian Vanduse Team joined our training hours for some seasons. During these years the Landesliga became really strong largely due to several huge huge competitions with sometimes 12 or more teams. Once there were even 14 teams who pulled from 1pm to 7pm; this was definitely too long. In the following years many teams of the Landesliga dared to make the step to the Premier League. Unfortunately, about 15 years ago, the Canadian Army had to leave Germany. As a result, the Landesliga had to be reduced. Nevertheless, some of the Premier League Teams built a Second Team, and others also joined the Landesliga.

Presently, eight Teams compete in the Premier League in a tournament-competition (round) for the national title in the 640kg-class. Meanwhile seven of them are from southern Badenia, as as mentioned before, our home area. There are also National Championships in the 600kg-, 720kg- and the youth-class, however, these tournaments take place in just one day and every club in Germany can join it. In 2004 we organised the 600kg-national championship in Neuried and under a high figure of supporters we reached a very surprising 3th place. In southern Badenia we have a youth league including several teams; one of these is our team. On this website you will also find the results of our competitions and some more info, a huge gallery and an interesting link-list. Sorry that the rest is written only in German. It is just too much work to transform everything into English. But I will do my best to keep up with the most important events and info about our Tug of War team and what is going on in our area. If you miss a link to your homepage, or if you have any comments, just send an email, or leave a note in our Guestbook.

Have fun, and good luck on the rope.